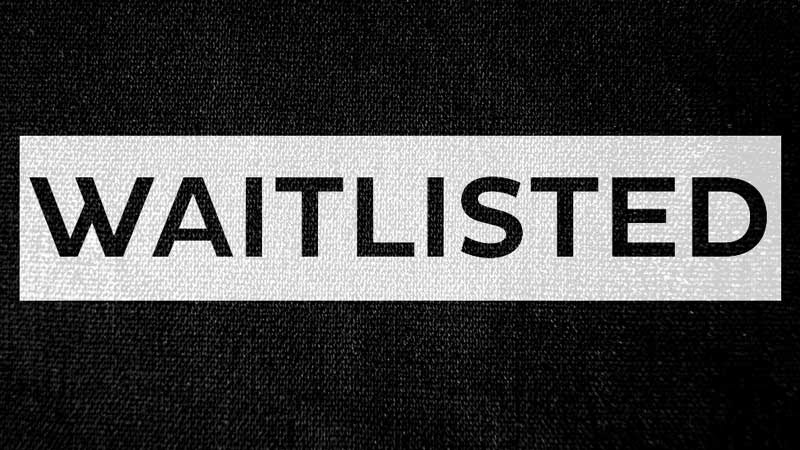 The dreaded waitlist. You weren’t rejected, but you weren’t accepted either. The waitlist means the college likes you well enough, they just don’t love you enough to accept you at this time. They want to keep you hanging on until they find out if they’re loved back by the students they did choose to accept. Now the ball is in your court—let’s consider your options:

1. Hopefully you received an acceptance from another college that you like even better. Easy decision – inform the college that waitlisted you that you’re no longer interested and have made other plans.

2. You were waitlisted by your first-choice school, and you’d sell your youngest sibling to go there. Easy decision – you make a deposit at one of the colleges where you were accepted and let your dream school know that you’d very much love to remain on their waitlist. Follow this up in any way they will allow—some colleges permit you to submit updates, others don’t. Check the rules and follow them.

3. You can’t decide. Tough decision – you want to be done with this “college stuff” and know where you’re going next fall. But you’d really love to go to one or more of the colleges where you were waitlisted. You still need to make a deposit at one college where you were already accepted before May 1. You can choose to remain on one or more colleges’ waitlists.

Choosing to remove yourself or stay on a waitlist seems to be more of a psychological decision than a statistical decision. The waitlist conversion to acceptance numbers, particularly at the most selective colleges and universities, aren’t very encouraging. Last year Northwestern University only accepted 2.2% of students from the waitlist, while Boston University enrolled only 7 students of over 4000 on their waitlist.

Conversely, UC Berkeley accepted 27%.  Unfortunately, the past year’s statistics do not predict those of the current year.  Being accepted from a waitlist is tied entirely to the yield – the number of students who choose to attend. As an example, if a college had a yield rate of 50 percent last year and it increased to 65 percent this year, they won’t be taking anyone off the waitlist; instead, they’ll be hunting for beds for freshmen. On the other hand, when the yield shrinks, the waitlist opens up; it’s just too variable to be predictable.

Waitlists are not generally ranked. Colleges use them to fill needed spots in their class— to make sure they have enough classics majors or journalists or oboe players, as well as full-pay students. Students and families need to evaluate the impact of waitlist stress on the student at this point in the process. Some carefree students just want to find out and approach the decision in a matter-of-fact easy-going manner: “If I get in, great, if I don’t, that’s fine, too.”  But too many other students have already had their hearts broken once, or even twice, if they were first deferred and then waitlisted.

Unfortunately, many students take college rejections and waitlists too personally and beat themselves up over it, sadly thinking they have disappointed their parents, or that this rejection defines who they are. It doesn’t.  For many of these students, closure is a good thing. Decide between the colleges that offered you a place and get excited about the new adventures that lie ahead.

To learn more about the Waitlist process,